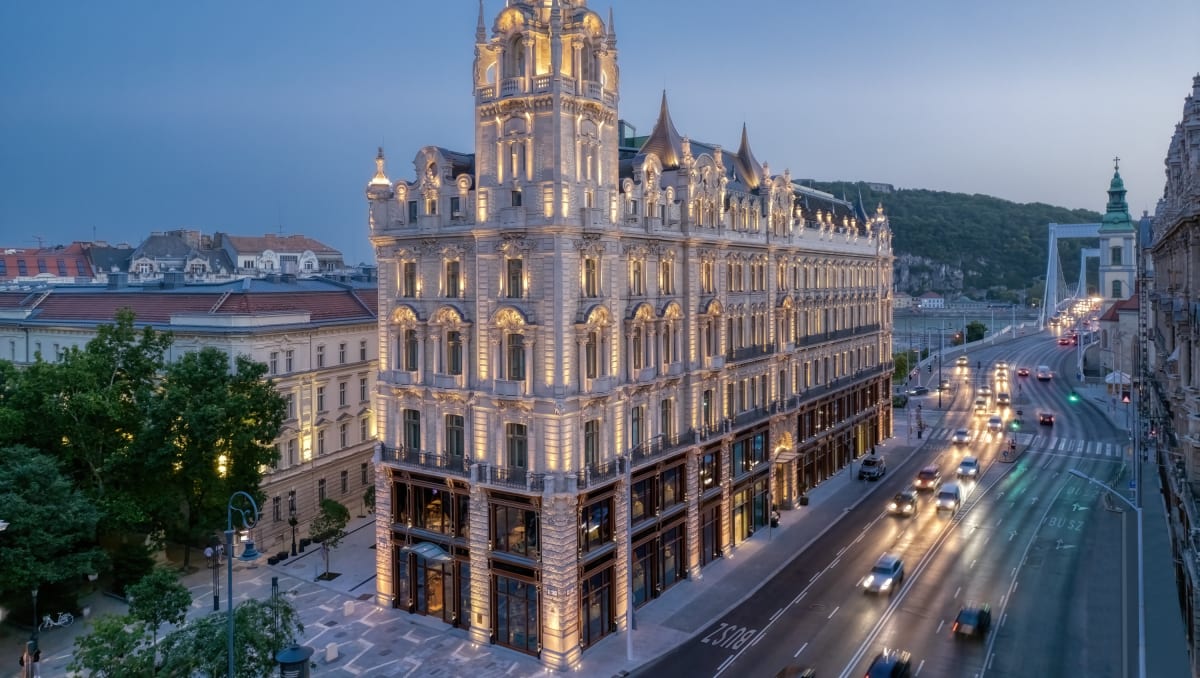 Matild Palace, a Luxury Collection Hotel, Budapest has redefined elegance in Hungary. As one of the most iconic buildings in Budapest, the hotel boasts a highly distinctive ambience representative of its Hungarian heritage, which runs beautifully through its core and is unmistakable from the moment guests step foot through the front doors.

Built during the Belle Epoque era, in 1902, by Kálmán Giergl and Flóris Korb, the Matild Palace was developed under the patronage of Her Imperial and Royal Highness Maria Klotild of Saxe-Coburg and Gotha to serve as the social hub of the city. The Duchess dreamed of the twin palaces to greet those who enter the bridge as a graceful lady. Thus, the Duchess asked the famous architects, named after projects like Liszt Ferenc Academy of Music and New York Palace, to draw up the plans. Korb and Giergl envisioned of an English Baroque palace on either side of the road that would serve as the gateway to the bridge under construction.

The neo-baroque palace is listed as a UNESCO world heritage site and is under monumental protection since 1977, and today its beauty is further glorified by the exceptional exterior lighting concept designed by renowned Maurice Brill Lighting Design (MBLD) with a visual journey of both architectural character, discovery and mystery for this graceful palace.

Located at the gateway to the Elisabeth Bridge over the River Danube and built as a guardian of the bridge to Budapest, Matild Palace has many compelling stories to tell. At the time of construction, the palaces were built with pioneering techniques. The core iron structure was adorned with beautifully crafted carved stone. The legendary Otis Elevator Company installed the very first elevator system in Hungary in the building. Glass windows were made in the workshop of the famous Hungarian glass artist Miksa Róth, whose works also decorated the Hungarian Parliament Building and the Buda Castle. All the ceramic tiles were supplied by the world-renowned Pécs-based Zsolnay manufacture. A true coming together of the best of Hungarian craftsmanship and ground-breaking architecture.

It became the first coffee house and shopping centre opening doors after the Second World War and here, the illustrious Hungarian author Gyula Krúdy created much of his fictional work, the most notable being the symbolically reimagined figure, Sindbad the Sailor.

The transformative design of Matild Palace by the award-winning MKV Design provides a journey: From an imperial palace once the epicentre of the city for the royalties and elite, to a modern new playground for today’s discerning leisure and business traveller, self-confessed artisans of leisure, and local foodies.

Carefully crafted contemporary furniture gives way to some of the hotel’s most spectacular and stand-out features, including hand-made and awe-inspiring feature chandeliers, unique mosaic flooring, in-door walking bridges, and a modern interpretation of a traditional picture wall in the main lobby featuring the photos of the monarchy family and the history of the palace itself.

The Matild Palace brings a new era of entertainment and gastronomy to the city with its world-class venues as well as contemporary cabaret shows. The four distinctive dining venues are conceptualized by the Michelin Starred Chef Alec Howard. To top it all is The Duchess, a secret rooftop liqueur library and garden inspired by the Arch Duchess Maria Klotild. This glamorous hideaway boasts enviable 360-degree views of Budapest with sumptuous chill-out areas designed to relax and unwind the night away with friends. Accessed through a hidden entrance it is the gateway to a concealed and decadent story of glamour and stunning mixology blended by a carefully curated soundtrack. Such is its appeal; locals are hailing it as the place to be and be seen.

The Matild Palace Hotel is committed to inspiring guests with its rich history, culture and epicurean excellence. Combining luxurious surroundings with authentic experiences and exceptional lasting memories, it serves as the most spectacular gateway to exploring the magic of this enchanting city.

Venue Response Time:
Within a day

My Overseas Wedding creates surprisingly amazing experiences for people to connect and celebrate together anywhere in the world. We believe celebrating together should be common place and simple to organise. In other words, we innovate online for people to celebrate offline.